For a second consecutive year Vedra International met doctors from all over Bulgaria in the picturesque village of Brushlian (meaning “ivy”) at the foot of the Strandja mountains. The first autumn rain did not ruin the enthusiasm of the guests, and more than 200 physicians dressed in beautiful folk costumes from different areas of Bulgaria joined the Prospan Scientific Forum. In addition to a rich folklore program, the company also introduced the latest news in the treatment of cough and bronchitis.

The location of the gathering is not arbitrary, either, as it was chosen by Vedra because of the healing air and the name of the village, which is the same as the main ingredient in the product Prospan. The dry extract of the ivy leaf is used for symptomatic treatment of chronic inflammatory bronchial diseases and acute respiratory infections.

In an old Strandjan tradition, the two executive directors of Vedra – Mr. Dian Dimov and Mrs. Teodora Petrova, welcomed the guests with delicious festive Bulgarian bread, baked by the grandmothers of Brushlian. Charmed by the unique atmosphere of the architectural and historic reserve, the doctors participated in a workshop on Strandjan folk dances with the folklore ensemble “Nastroenie” – Malko Tarnovo under the accompaniment of the Zherava-Bourgas orchestra. They visited the old Revival local school and the Ethnographic Museum House and participated in a typical Strandja seated ritual with typical folklore and dances. The guests also took part in the workshop for Strandja crafts in the Museum of Traditional Agriculture in the village, where each created a unique felted flower.

At the end of the scientific and folklore fair, Vedra honored and rewarded the guests with the most original costumes. All doctors took with them a piece of magic from Strandja and promised to come back again next September. 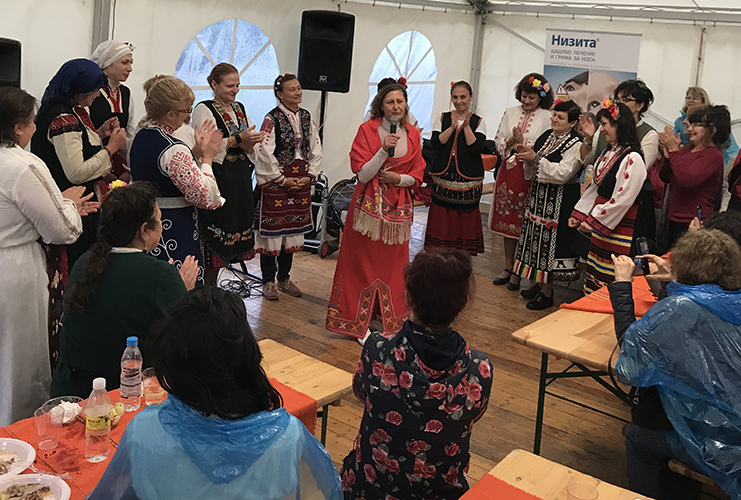